before he heard the call to play the blues, to join The Good the Bad and the Blues.
This time around he was spellbound by the music’s power.

After sitting in with the band he took over lead guitar and vocals, finally taking over as leader when the original founder retired. Today he shares songwriting with drummer ‘Hollywood’ Mike Darby, with B.J. Love on keys and Gordon Henry on bass. Everyone gets involved on vocals and some unexpected gospel-influenced vocal harmonies.

Seven years on, it’s a mark of their rock solid chemistry that The Good the Bad and the Blues made it to the International Blues Challenge in Memphis several times, to the semi-finals in 2014, and to the finals round in 2015 (eight bands made the finals out of 330 entrants).
Today Naim and his crew take on a spectrum of sounds adding R&B, rock, pop, soul and funk but the band is rooted in Chicago blues. You can hear it in their videos on YouTube and on the band’s 2015 debut disc, Live At The Strand, recorded at a refurbished theatre in Freemont, Ohio (they’re currently working on their first studio album).
This week marks their second Edmonton appearance as the band continues to expand touring horizons beyond the mid-central U.S., with a name that says the blues isn’t just about tragedy.

“Blues is a strange music. It’s gonna reveal who you are.

THE VICTORY OF THE BLUES

Ye Olde Durty Bird on St. Clair is packed, as expected on a Saturday
night. As I arrive, local mainstays The Good, The Bad and the Blues
play an extended riff on “Route 66.” Groups at most tables are
engrossed in their own conversations, or in the football game
showing on the big-screen TVs. The crowd seems to barely engage
with the band at all. This will soon change.

“We’ll be here until around midnight or so, so we hope you’re ready
to party,” says lead singer Aayan Naim. They launch into a fast-paced
number, with the bass thumping so loud I can feel it deep within my
chest. With a few songs, they grab their audience’s attention through
sheer force of awesome. If you want to experience true, unfiltered blues
goodness, you must seek out The Good, the Bad and the Blues.

​We are please to announce we are currently working on our next CD. The new songs are really special. We hope you enjoy listening to it as much as we did recording it.

“As Naim explained, “It is more than just music. It’s an expression of the soul and the emotions behind it.” The guitarist remembers being struck by the power of the blues as an adolescent, when he heard B.B. King perform “The Thrill is Gone.” “I remember hearing that song when I was young, and not understanding all of what it was saying, but feeling all of the emotions in it. I then found myself playing it over and over again,” Naim said. While he always loved the blues, Naim started out playing funk and R&B. The legendary Toledo blues band The Griswolds, along with Crawdaddy, inspired him to shift his focus. “I played behind Crawdaddy at a concert. At first, I thought the music was quite simple. But the more I played it, the more complicated it became. I just had a natural affinity for it, and it just worked.””BY KAYLA WILLIAMS - Toledo City Paper

and The Blues ​welcomes you

“You can’t play the blues, you have to be the blues,” said Aayan Naim, the bandleader of The Good, The Bad and the Blues, explaining on Saturday why his More than 250 contestants in band and solo/duo categories represented blues societies from all across the globe at the Blues Foundation’s 31st International Blues Challenge. Each had aspirations of making it to the finals in which the top eight in each category performed in the cavernous and regal Orpheum Theatre up the hill on Beale Street. group made it to the storied venue for the IBC Finals. “It’s more than licks and tricks. It’s emotion. It took me a long time to get to that place. I learned to slow down and let people enjoy it.”” 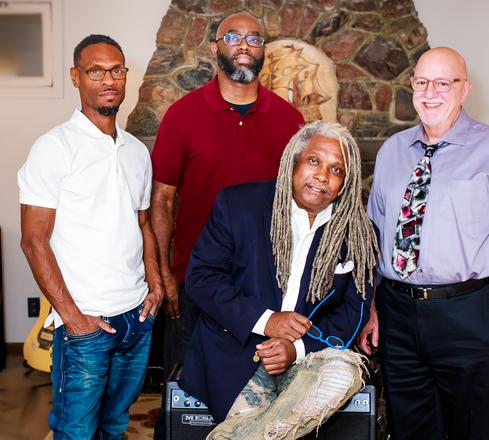