and The Blues ​welcomes you

“You can’t play the blues, you have to be the blues,” said Aayan Naim, the bandleader of The Good, The Bad and the Blues, explaining on Saturday why his More than 250 contestants in band and solo/duo categories represented blues societies from all across the globe at the Blues Foundation’s 31st International Blues Challenge. Each had aspirations of making it to the finals in which the top eight in each category performed in the cavernous and regal Orpheum Theatre up the hill on Beale Street. group made it to the storied venue for the IBC Finals. “It’s more than licks and tricks. It’s emotion. It took me a long time to get to that place. I learned to slow down and let people enjoy it.””
- TIM PARSONS, Tahoe Onstage (Feb 11, 2015) 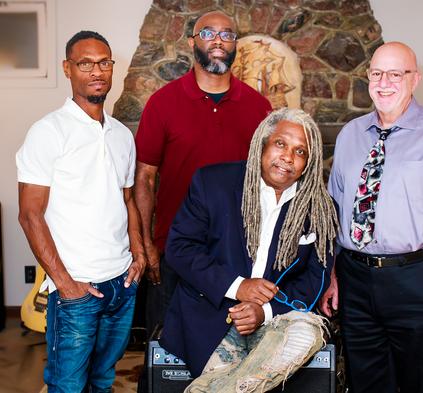 new releases
66 • LIVING BLUES • August 2019
THE GOOD, THE BAD AND THE BLUES The Good, the Bad and the Blues
Third Street Cigar Records – TSC 105
Toledo, Ohio, may not exactly be known as a breeding ground for the blues. After hearing the Good, the Bad and the Blues’ spicy mix of blues, soul, and a touch of
gospel, listeners may think differently of the band’s Midwestern home. Bandleader and
guitarist Aayan Naim—the only non-Toledo native in the group—grew up in Chicago
across the street from Howlin’ Wolf. His guitar work and songwriting show that the
blues seeped into his bones. The sweet harmony vocals that appear on several tracks
demonstrate the band’s gospel roots. Soul blues legend and Third Street Cigar Records
label mate Johnny Rawls contributed a few original tunes and collaborated with Naim on
two tracks. All of these influences came together in the studio to produce a heady brew
of polished, contem-porary blues with deep roots in tradition.
The Naim original I’ve Been Down sports a percolating R&B groove and razor
sharp horn riffs from Ric Wolkins (sax), Mark Lemle (trumpet), and Travis Geiman
(trombone). The band’s love of gospel is apparent in the beautiful harmonies on the
song’s chorus of “I’ve been down / but I ain’t out.” The searing mix of blues and funk on
Anthony Gomes’ Blindog has shades of the Neville Brothers. Drummer/lead vocalist
Hollywood Mike Darby and conga player Ray Benson lock into an infectious,
polyrhythmic groove while Naim’s guitar work is impeccable. The familiar war-horse Can
I Change My Mind? sounds fresh and inspiring in this band’s hands. Darby’s warm tenor
vocals sound like a slightly more weathered Robert Cray, and deft keyboard work by B.J.
Love fleshes out the sound.
The Rawls/Naim collaboration Read Your Mind and Rawls’ Do Do Do Do both
ooze Memphis grease. Darby outdoes himself on vocals—his skillful use of vibrato and
dynamics shows he’s listened to his share of Stax Records sides. In interviews, Naim likes
to say, “You can’t play the blues, you have to be the blues.” With polished musicianship
and heartfelt performanc-es, each member of the Good, the Bad and the Blues takes Naim’s words to heart.  —Jon KleinmanType your paragraph here.

The rich sound of this band, is a mixture of the fresh new sounds of the new and deep rooted past of Gospel, Blues, Soul and Funk. The blending of influences make a rich dynamic experience that touches every sense of your being, you can feel it, see it and hear it. This band is a full time, hardworking, blues band that gives 100% every second on every songs.

Aayan Naim the front man, Known for his energy, grew up in Chicago directly across the street from Howlin Wolf, talk about blues heritage he’s got it. Playing lead guitar and singing is his thing. He is a true artists and entertainer.